The importance of abstinence during surrogacy 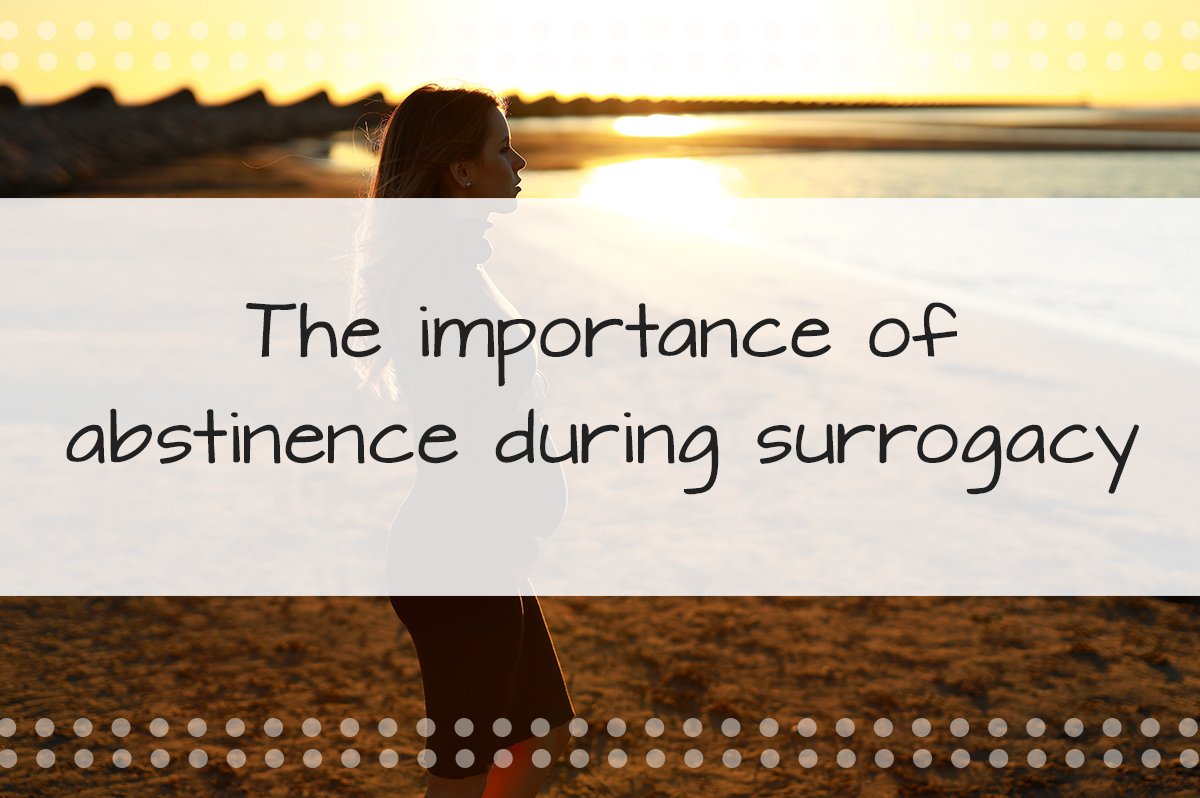 The importance of abstinence during a surrogacy

There is nothing more compassionate than a surrogate who chooses to have another infertile couple’s baby for them. It is strongly recommended by reproduction experts, fertility doctors and your local surrogacy agency- for potential surrogates to practice abstinence from sexual intercourse at all times that their doctor advises.

The grave importance of abstinence during surrogacy cannot be emphasized enough. A surrogate should abstain from sex closer to the time of the embryo transplant procedure to help prevent the rare but possible chance of birthing their own child along with or instead of the intended parent’s baby.

What is Superfetation, and How Common is This?

The definition of superfetation is an extremely rare incident where a mother who is already pregnant conceives another child days or weeks following the first pregnancy.

Unlike cases where a mother or surrogate becomes pregnant with multiple embryos that are transferred to her uterus resulting in a multiple birth pregnancy, a superfetation pregnancy involves two separate gestational sacs that impregnate a woman at two separate dates with one fetus being older or younger than the other.

Additionally, this situation can cause some important legal issues regarding superfetation as well.

Why Surrogates Are Given Birth Control Before Embryo Transfer

Every month, a woman’s uterus prepares itself for a possible pregnancy. Reproductive hormones stimulate the body to build up uterine lining tissue that creates an ideal space for a fertilized egg to grow.

Woman who suffer from infertility problems often decide to undergo IVF or in-vitro fertilization. This procedure helps to stimulate the ovaries to produce more eggs. Many woman use egg retrieval methods from a licensed fertility clinic to make embryos that have their DNA- then a surrogate will actually carry the baby during the gestational period.

Surrogates are often given birth control to allow the medical team to safely monitor and control her regular cycle. This medical process uses birth control that helps to synchronize the cycles of the intended mother or egg donor and the surrogate for the best chances of achieving a gestational pregnancy in the surrogate.

Legal & Ethical Consequences Surrogates Face After Delivering Her Own Baby

The legal & ethical consequences of a surrogate delivering her own baby after being paid to carry another couple’s baby should be seriously considered before becoming a surrogate.

A gestational surrogacy contract typically outlines that the surrogate will carry a baby to term that is the intended parent’s genetic child. DNA testing following birth usually occurs to ensure that the baby is truly the intended couple’s child that carries their combined DNA material.

There can be confusion if the surrogate is found to be pregnant with her own child both legally and ethically. While rare, there have been some cases that have been documented in recent years.

This is exactly why fertility clinics and surrogate agencies are adamant regarding their rules on when and how a surrogate abstains from sex.

Have There Been Cases Where a Surrogate Becomes Pregnant with Her Own Child?

There have been reports of woman who were in the process of becoming a surrogate who then became pregnant with her own child before or after the embryo transplant procedure. This is almost always due to the surrogate not following the agency rules on pelvic rest or no sex during this time period.

CNN and many other news entities reported the case of one surrogate who did become pregnant with her own child and the child of the intended parents. This was not a typical multiple birth that is more common in IVF and/or surrogate pregnancies. In this case, the intended parents only had one embryo that was transferred to the surrogate’s womb.

The surrogate delivered her own baby and the intended parent’s baby by Cesarean section. The surrogate and her doctors thought that the two babies would be identical twins when two heartbeats were found some weeks following the embryo transfer.

DNA tests following birth did prove that the surrogate and her partner were the genetic parents of one of the conceived babies. This emotional situation was eventually resolved in the courts, but the stress and consequences were overwhelming for all involved.

Obviously, a competent agency that works with surrogates do require abstaining from sex close to date of embryo transfer procedure and all other times that the doctor recommends afterwards.

Even if using a condom, a surrogate can still become pregnant if the condom fails. Agencies have strict compliance regulations to help prevent the chances of the surrogate becoming pregnant before the transfer of embryo takes place and for the required pelvic rest time afterwards typically lasting a few weeks.

The surrogate and perhaps the agency can be legally liable to pay back any money and/or other benefits intended to be used for the gestational pregnancy of the surrogate carrying the other parent’s baby.

Another critical factor to consider is the reality of a surrogate having to raise a child that she wasn’t expecting or the emotional toll of giving this baby up for adoption to someone else.

At Made in the USA Surrogacy, we strive to help surrogate mothers feel that they are giving a wonderful gift- and also an opportunity. They will have time after the transfer, and after the birth of the surrogate child to resume their sexual lives with their partners- but it’s extremely important to realize how the emotions and finances of the intended parents and all involved will become completely upended for no reason if the surrogates cannot remain self-controlled and abstinent.

It’s deeply concerning to our surrogacy agency if we have any surrogate mother who does not show reverence for the process of surrogacy- and therefore work very hard to filter through candidates who will maybe not be as mature as others, to understand the gravity of their daily decisions when going through this process.

Most surrogates we come across make the decision to help another family because of a deeply held understanding that parenting is a beautiful thing that should be enjoyed by all couples who wish to have a child.

The part that most surrogate mothers miss or may not understand fully, is that the intended parents are under GREAT financial stress. Intended parents have to pay for the following surrogacy costs during their surrogacy journey:

The average surrogacy costs- even before finding a surrogate, will cost parents an average of $80,000. After they find a surrogate and fully go through all medications, legal, transfer fees, surrogate bonuses, agency fees etc., will cost intended parents anywhere from $120,000-$140,000 depending on their surrogate and fertility clinic costs of choice.

These numbers differ (see this article on how much a surrogacy costs), but you get the general idea. Hopefully you can understand the gravity and responsibility that we hope surrogate mothers to have when it comes to abstaining from sex due to the financial reason alone- which will be completely left in ruins if anything goes wrong with who’s baby is found in your uterus!

Other Reasons for Surrogates to Abstain from Sex During Pregnancy

While agencies that oversee surrogates realize that going without sex for a period of more than a year is likely not feasible, surrogates should still be aware of the consequences when they have sex during the forbidden times.

It is important to consider the consequences of unprotected sex or sex with multiple partners that haven’t been thoroughly screened medically. The risks of the baby contracting a sexually transmitted disease from the surrogate are good reasons to follow the agency guidelines precisely.

It’s important to remember that all surrogate mothers will be required to report any new sexual partner they have in their life, or any new relationship that has formed that is sexual in nature. This person will be required to submit to STD testing and likely any others recommended from your fertility clinic in order to avoid any possible risk to the baby.

Requirements of Becoming a Surrogate with Made in the USA Surrogacy

When you decide to become a surrogate with our agency, we do require that surrogate mothers undergo a background check and also have their sexual partners and others living in the home over the age of 18 to undergo a background check. We are committed to proving the highest level of surrogate mother for our intended parents, and we go to great lengths to ensure that the proper candidates are chosen. We hope all prospective surrogates understand the grave legal, financial and emotional damage that can come from becoming pregnant while in contract with their intended parents.

A dedicated team of surrogacy-related experts are happy to take your call or online query form. Our surrogate services include close interactions with both our surrogates and our intended parent clients.

If wondering about the need to practice sexual abstinence, or have questions about any other matter, feel free to browse our extensive blog articles on a wide variety of topics about the subject of becoming a surrogate- also, please fill out our inquiry form.

We truly understand all of the emotions that come with becoming a surrogate. Our experienced and caring team will be there right at your side each and every step of the journey.